The electrically conductive paints developed by Cromas for professional and industrial use come in two typologies:

These two products allow to modify the superficial electric property of the most different materials and have different applications:

The copper based paint is used when high conductivity is needed and when the tension (V) and also the power (A) transfer is not minimal. With this paint, it’s not only possible to discharge electrostatic charges but also to create small circuits. The resistance (Ohm) is obviously higher than a copper wire and this is due to the polymeric part (resin) and to the reduced dimension of the copper spheres. The product is compliant to the RoHS guidelines.

In the following video we show an example of electrically conductive paint, where low tension LED diodes are  switched on by applying the paint directly on wood, quintessential insulating material.

The formulation has been studied to provide the maximum conductivity at industrial costs, which wouldn’t be possible to have by using finer conductors which wouldn’t withstand oxidation, like silver or tungsten.

Powdered copper conductivity is raised by removing the superficial oxide, formed by very fine metals, while the resin used allows to limit the insulating effect, typical of the polymers.

While applying this paint to make the materials conductive for galvanizating treatments, it’s also possible to easily polish it to make it perfectly smooth.

Main features of copper based paint

It’s difficult for us to declare the value of the final resistance, but we can give indicative values, as shown in the video.

The measure of the resistance, at equal lenght, is influenced by:

It’s important to evaluate and make application trials to each project. Spray gun application is the one that allows to obtain a surface with higher conductivity and more reproducible values. 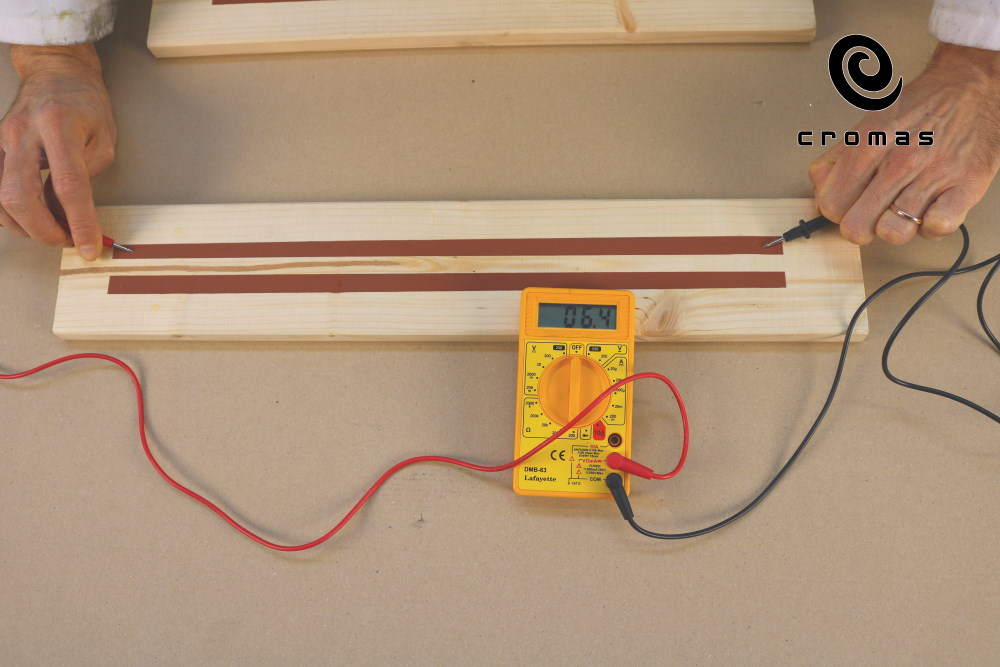 Copper based conductive paint. Measurement of electrical conductivity in ohm on wood.

Copper based conductive paint. Measurement of electrical conductivity in ohm on wood. 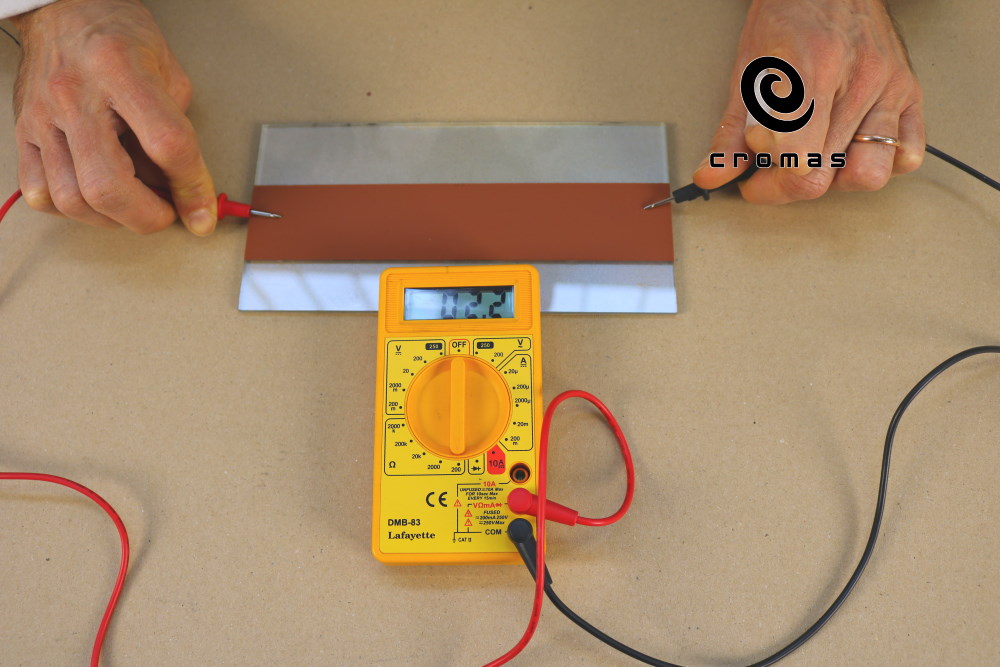 Copper based conductive paint. Measurement of electrical conductivity in ohm on glass.

Copper based conductive paint. Measurement of electrical conductivity in ohm on glass.

The color of the paint is copper. Some changes are possible, but will negatively affect the conductivity of the paint layer.

If the surface treated with this paint requires a superficial resistance, must then be covered with the appropriate finishing, resin or paint. 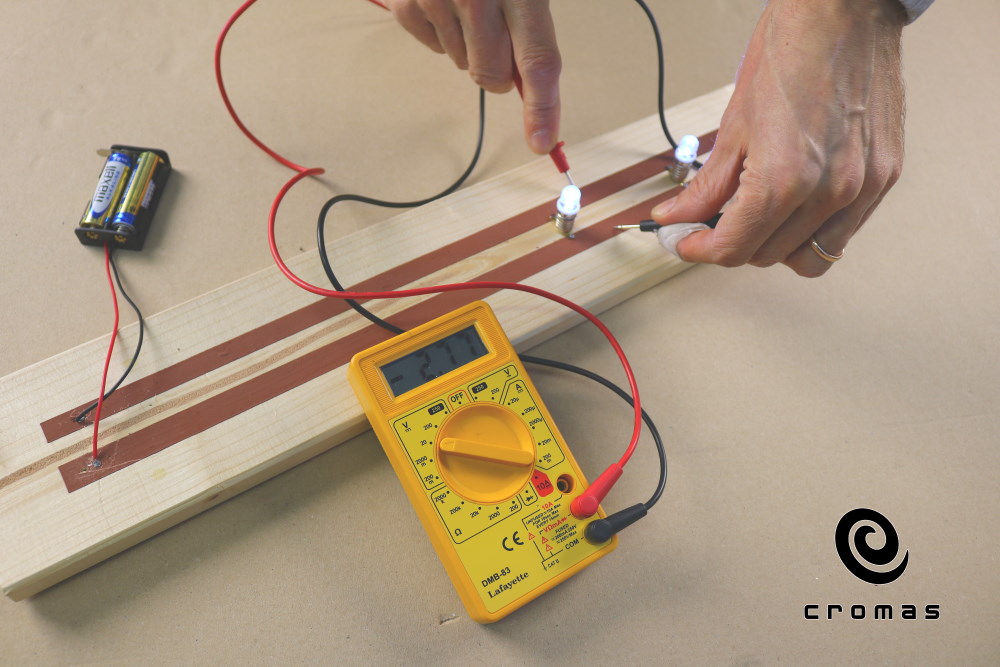 Creation of a simple electric circuit on wood, with the electrically conductive paint is possible to turn on leds.

Creation of a simple electric circuit on wood, with the electrically conductive paint is possible to turn on leds. 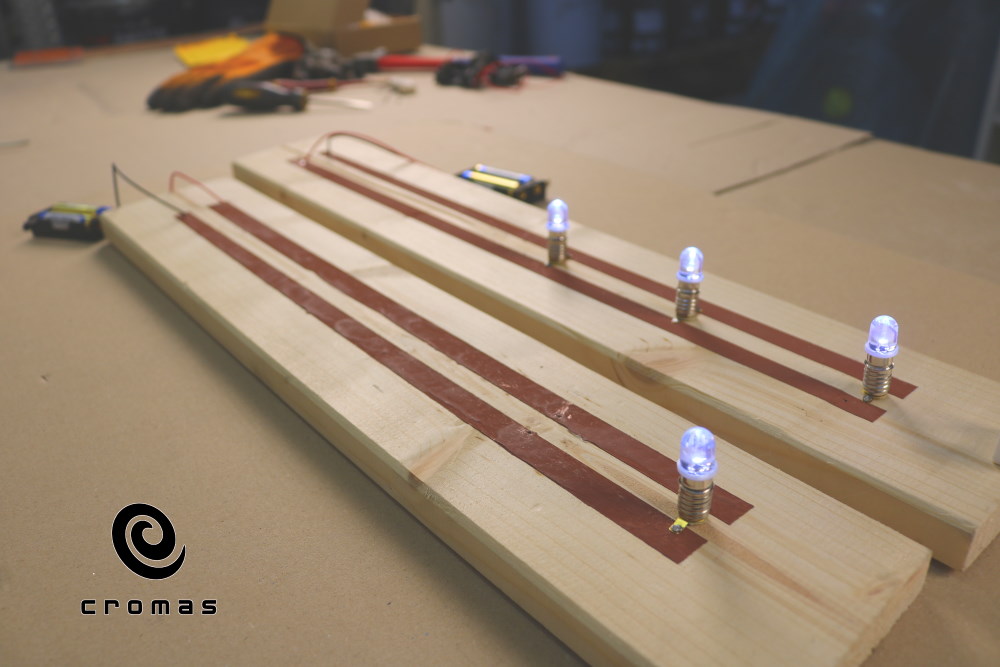 Creation of a simple electric circuit on wood, with electrically conductive paint is possible to turn on leds and connect switches

Creation of a simple electric circuit on wood, with electrically conductive paint is possible to turn on leds and connect switches

Graphite allows to obtain low conductivity paints. This particular product is made by using a concentrated graphite and a special formulation which doesn’t isolate the graphite particles. The same graphite is grinded at room temperature and not in the cold, to avoid shapes which would give an unpleasant look to the surface. The product is available solvent-based (for industrial and artigianal use) and water-based (for walls).

The color of this paint is black, because of the graphite. The product is compliant to RoHs guidelines.

These paints are mainly used to discharge static or temporary charges from perfectly insulating materials, such as wood or plastic.

There are several wall applications of electrically conductive paints, usually used to create shields for static charges or electromagnetic fields.

If the artifact needs to have the same resistance of a lacquered surface is necessary to apply another layer to satisfy the resistance needed.

What are the applications of electrically conductive paint?

There are several professional applications for this paint. When making conductive an electrically insulated surface, you can:

On which material it works and can be applied?

How does the electrical conductive paint work?

The electrolytic copper instantly gets covered by a layer of oxide, it gets removed with our special treatment and then dispersed and stabilized in a liquid (mixture of solvents) and an acrylic resin. Once applied and dried, the copper particles get closer until they meet and allow the passage of electricity in a steady manner.

What are the electrical features of the dried film?

Unfortunately, every application is unique and should be tried. The video recommended on this page has been filmed to explain the functioning, which depends on the application.

How long does it take to dry?

Complete drying and curing occur in less than 4 hours at around 20°C, permanent electrical feature is stable only after 24-48 hours.

Can the paint film be heated with tin?

Our trials and our clients’ trials exclude this possibility.

No, the aesthetic appearance and the conductivity of metallic paints are completely different features.

Can the paint be used to fix the rear window of the car?

Cromas conductive paints can be used professionally or industrially, there are specific products for diy repairs.

Can the paint film be used to develop heat by taking advantage of the resistance?

It’s possible, but every usage must be tested. In this particular case, it’s important to mind the presence of resin, organic material which could deteriorate or burn in case of extreme heat.

How can the conductive paint be insulated?

There are many suitable products, first of all paints and epoxy resins.

To examine the topic “conductivity”, we suggest the following pages:

Resistivity of the materials

Let's talk about your project